With Download Festival rearing it's head on the horizon and awakening from it's slumber, Donington Park is heating up once again for one of the biggest events on the festival calendar. All three headliners this year have unique and interesting stories at Donington with all three shows truly feeling like a culmination of their past on the hallowed turf.

For Friday night's Avenged Sevenfold this headline slot feels far more perfectly timed than their first stint atop the pile in 2014. Since then the band's stock has risen even further and as far as their overall show is concerned they've absolutely come on leaps and bounds with each member of the Avenged clan fully embracing their position in the upper echelons of the festival scene. 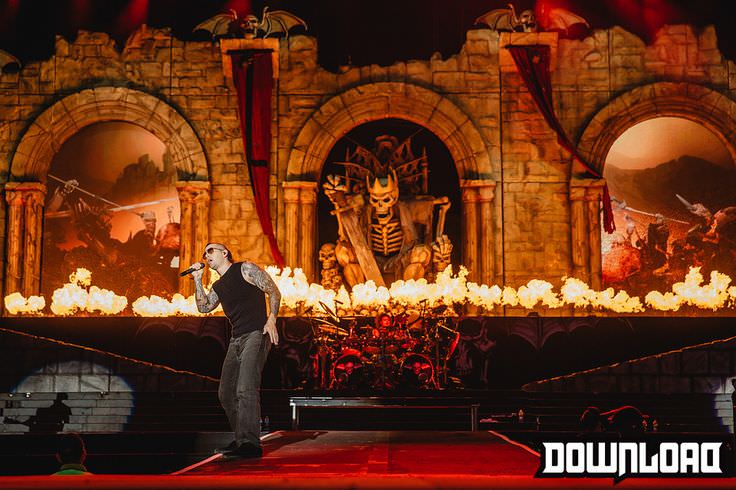 Since their first headline show in 2014, Avenged released their sprawling epic The Stage which contains an array of moments no doubt written with headlining spectacles like this in mind. It'll be interesting to see how much of the performance will be focused on this record or whether the band will go for the jugular as far as greatest hits are concerned. Long-time punter of Download Festival Holly McRay is certainly hoping the band throw in some of their older, deeper, cuts, "I've loved Avenged Sevenfold since day one. I know there are so many albums to choose material from now but would love a good core of the set-list to be set around some of the biggest moments in their early days in honour of The Rev".

There's more than a very real chance that Avenged Sevenfold will steal the show this year. Understandably all eyes are on that Guns N' Roses set on Saturday and of course the Prince of Darkness on Sunday, but with that being the case the potential to set the festival alight is ripe and ready for the Californian five-piece.

The magic of playing at Donington has been summed up brilliantly by long-time contributor to Room Thirteen Nick Spooner, "My first trip to Download Festival was in 2012, which shared a number of elements with a later trip of mine in 2016, two of which being: both years it chucked it down, and both years Black Sabbath played. However, regardless of the weather, I remember becoming completely enamoured with the place during the Friday in 2012. The sense of history, my incomprehension at the scale of the festival site (I hadn't been to anything that big at that point) and the quality of the bands on offer (that Sunday main stage line-up sticks firmly in the memory) all contributed to an unforgettable experience, and one that my friends and I still talk about. That said, Download 2017 remains, without question, my favourite festival adventure to-date. Although the main stage failed to truly titillate me over the course of the weekend (SikTh and Prophets of Rage being notable exceptions), some astonishing sets on the 2nd, 3rd and 4th stages meant I was going home elated. Add to that a better site layout with a pathway between 2nd and 3rd stages, a sense that the place wasn't completely busting at the seams as in previous years, the reusable cup scheme that meant the fields didn't resemble one huge bin and, yes, barely a drop of rain, and Download 2017 was a triumph. I can't wait to get back there."

Speaking of Black Sabbath then, Download Festival 2018 is likely going to mark Ozzy Osbourne's final ever appearance at Donington. The Prince of Darkness has hit the road on his solo endeavours once again since Black Sabbath officially called it a day with the announcement going out not too long after the tour began that this will also be Ozzy's final run. With that said we are therefore on the brink of seeing one of the true gods of metal hitting a festival site he was so integral to putting on the map over the years for the final time. We're talking about going back as far as 1984 and 1986 for Ozzy's first set of Donington shows as part of Monster Of Rock - this is a stage and setting that is set firmly in his blood. 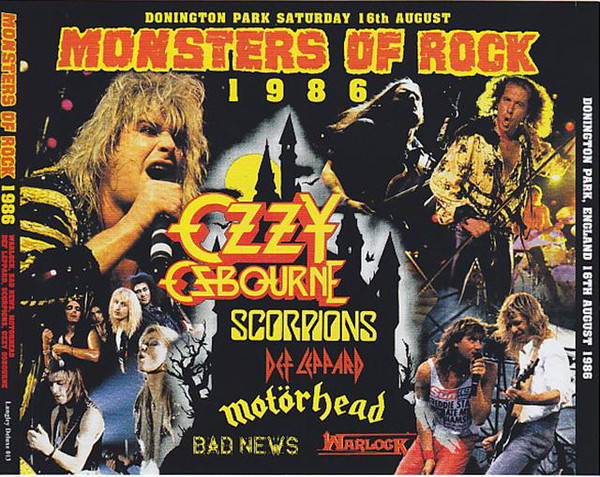 Poster for Monsters Of Rock 1986

Having a chat with someone who attended Monsters Of Rock in 1986 and will be attending the festival for the Sunday this year, Phil Strand described some of his experiences over the years at Donington, "As a festival Download is of course very different to those early days of Monsters Of Rock but the history and the atmosphere is still there. Whilst I wish the arena site had stayed where it was I absolutely love going back to Donington, it's a holiday! Ozzy might not be on the same form as he was in 1986 but I'll still be raising a beer to the sky when he hits the stage on Sunday night." On a similar note, another Download attendee of years gone by, Matt Thomas, described his best experience at the festival as "In 2012 when my mate lit a spliff just as the intro tape for Sabbath's Sweet Leaf started" to which Jonjo Warrick added "I never thought I'd see Sabbath live when I was growing up. I just assumed they were in the past and that I was born too late. Getting to see them at Download 2012 was an absolute revelation.". Nuff said right there.

On then to what is no doubt the biggest attraction at this year's festival. Download Festival 2018 will see the triumphant return of the "almost" original line-up of the almighty Guns N' Roses. Axl Rose, Slash and Duff McKagan have between them 'made good' on YEARS of speculation and demand for their return. The main gunslinger of the pack Axl Rose actually brought his previous incarnation of the band to Download Festival in 2006 where his shenanigans and a continuation of what had apparently become a tradition in being incredibly late on stage actually lead to many senior figures working at the festival vowing that unless things were very different they wouldn't look to welcome Axl back any time soon.

We are now twelve years on from that and things are VERY different. The rivalry, ego fights and at time utter contempt for each other has seemingly subsided with the band consistently pulling in incredibly high critical acclaim as night after night after night they are absolutely giving it their all for ultimately their fans. No longer do the band turn up late, they're punctual, tight and full of vigour and dedicating themselves towards set-times long enough to include every Guns N' Roses song you'll possibly ever want to see live. In a unique turn, it's almost like the band are paying their fans back for all the late appearances, no shows and more which frankly date back to the latter days of even Slash and Duff's first stint, by playing these huge sprawling, extended sets. At Download Festival 2018 Guns N' Roses have been given an unprecedented time slot of over THREE hours. Understandably selling out stadiums around the world since they kicked off their aptly named 'Not In This Lifetime Tour' there is little argument against the fact that this THE show to be at across the weekend.

To wrap things up then, and to add another little dose in to what makes the 'magic' of Download and Donington, Joana Dos Santos simply submitted this picture she took at the festival in 2015: 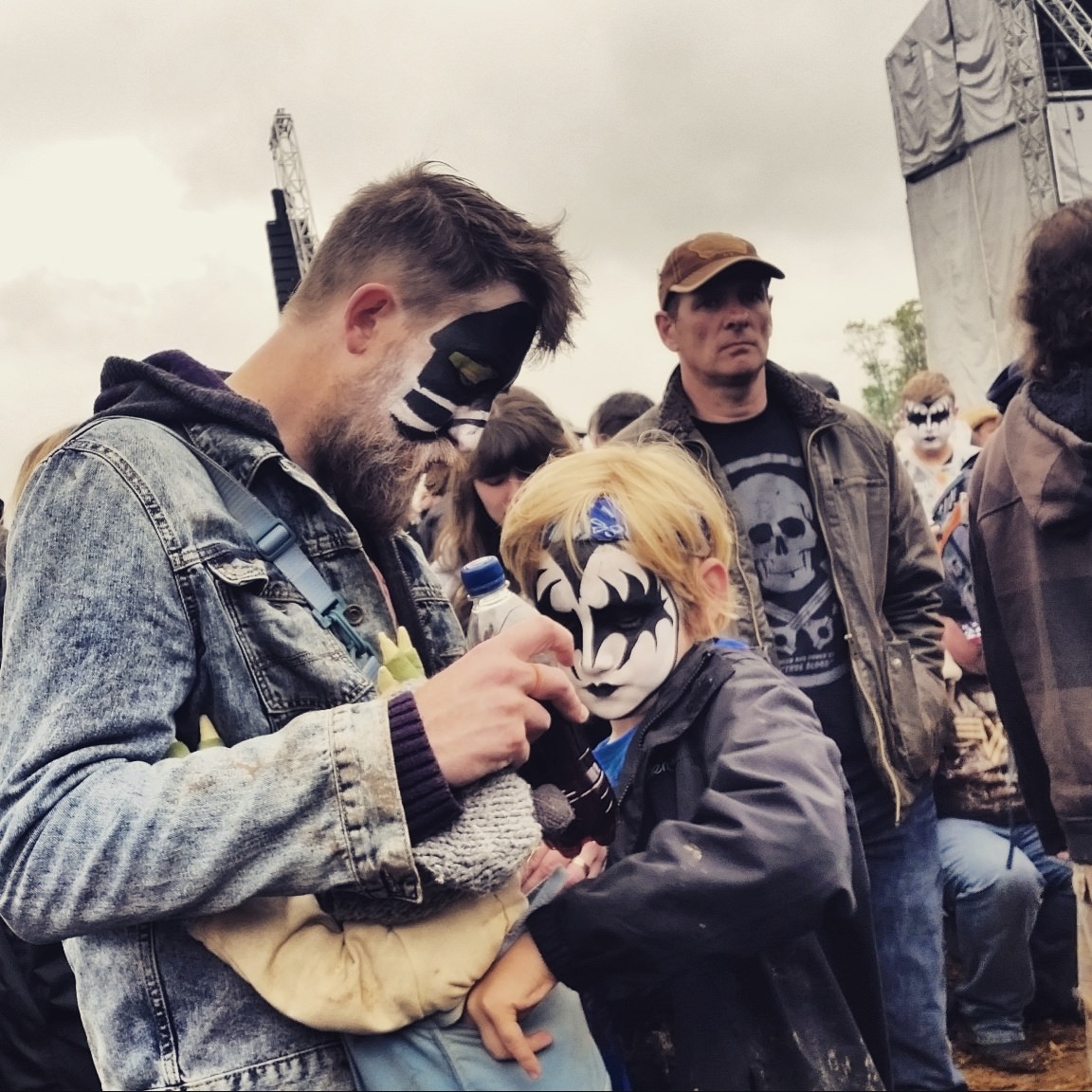 There are still a handful of tickets available for Download Festival 2018. Click on the banner on the side to take you straight through to the ticket purchasing page. Please ensure you always go through the official outlets.